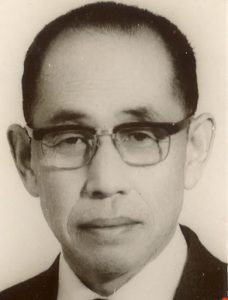 Master Tung Ching Chang has been called the greatest acupuncturist that ever existed. I-Ching scholar and traditional Chinese doctor, he became famous for miraculous and spontaneous results obtained using only a few needles. The acupuncture points used by him are unique because they are located opposite to the affected area. In most cases, the patient notes the effect immediately after inserting the needle.

Master Tung (董景昌 大師, DǑNG JǏNG CHĀNG DÀSHĪ, 1916-1975), was born in the Shangdong province of northern China. When China was occupied by the communists, he moved to Taiwan with Chang Kai-shek’s army and settled in Taipei. He is the last descendant of an ancient acupuncture system handed down from father to son and has quickly become one of the most effective acupuncture styles of the last 30 years. Master Tung’s acupuncture consists of over 740 points. Some of these points are those of the same classical acupuncture and hundreds of others have been “discovered” by the Tung family, thus making this style unique and effective.

Chinese acupuncture has a long history that some believe is easily extended to over 2500 years. The study of acupuncture starts from the foundation of Classical Chinese Medicine: Yin Yang, Wu Xing (五行; pinyin: wǔxíng, also known as the five elements or five phases or movements), the meridian system, the zàng-fǔ theory. From the Zàng-Fǔ organs the channel network of meridians, principal and extraordinary, cover the whole organism in its entirety, on the surface as well as in depth, carry the vital energy ‘qi’. The bases of the so-called Traditional Chinese Medicine (TCM), represent a standardized system of Chinese Medicine.
It is not the same thing as what happened in ancient times, when the acupuncturist was an apprentice who followed the teachings of his Master – especially his father or grandfather – and acquired through practice, the legacy of a therapeutic style rather peculiar. For this reason, throughout the history of acupuncture, countless styles have been developed all brought together in the common field of Classical Chinese Medicine. So it happened also for martial arts, taiji and qigong,

From one of the oldest family lineages, came Master Tung Chin-Chang (pinyin Dong Jin-chang). Serving in the nationalist army during the Chinese civil war, he was forced to go to Taiwan at the end of World War II. There for several years he continued to successfully practice his art as an acupuncturist. Having no children to transmit his legacy to, he decided in 1962 to open his teachings to new students. Master Tung thought that the selective and secret way of conveying knowledge hindered the development of acupuncture, and that many profound medical theories because of this had not survived past generations. Master Tung decided to use modern Western medical terminology rather than traditional Chinese concepts, because Western medicine was more influential and accepted at the time. He soon became famous for the miraculous and spontaneous results he obtained using just a few needles. The acupuncture points and techniques he used were unique, but in accordance with orthodox and traditional acupuncture. In most cases, immediate relief was noted after inserting the needle. More than 40,000 patients visited his clinic. But as often happened in those times, he never earned an academic degree. So when, in the 1960s, the Taiwan government began to regulate the medical professions, it was suddenly excluded from the practice and official teaching of acupuncture.

At the time of his death there remained a handful of disciples who immortalized his legacy and spread it all over the world. Master Tung personally left only one book, “Tung’s Regular Meridian and Points”, published in Taiwan in 1973. The book was dictated orally by Master Tung and transcribed by one of his students. Although there were other written works left by Master Tung’s ancestors, none of them survived today. Without the restless effort of Master Tung and the dedication of a lifetime, the Tung system could have endured the fate of many other schools of traditional Chinese wisdom, now extinct.

What is the particularity of the therapeutic style of Tung? There are many interesting aspects. First of all, the acupuncture point isexplored  and exploited in all its potentials derived from its specific location: part of the body, tissues touched during insertion, close channels and their relationship with the channels according to six levels, yin / yang, five movements, the theory zi wu liu zhu, nature of the point in particular with reference to the five shu points and finally according to the zàng-fǔ theory.
Thanks to the differentiated use of the therapeutic point, and to the use of peculiar techniques such as the Dao Ma and the Dong Qi, this style allows to use very few needles according to a rigorous logic, obtaining excellent results. The truly “oleographic” vision of the therapeutic point, makes Tung’s style open to countless possibilities of intervention. It is therefore extremely flexible and rigorous at the same time. Since the point itself works primarily, in this acupuncture the manipulation of the needle is overshadowed by the accuracy of needle insertion.

Many therapeutic points in the Tung system are classic points, but the insertion and localization takes place in a slightly different way, in order to obtain a wider spectrum of results.

For example, 33.14 DiShi (地 士 穴), which is located on the lung meridian, is very close to KungZui LU 6 which is the xi-clef point. Very effective for treating asthma, flu, colds, headaches and kidney deficiency problems, if an insertion at 1 cun depth is performed. But if we go down to 1 and 1/2, it becomes effective for cardiovascular problems. This point is an example of “deeper for the far and more on the surface for the neighbor”.

Another example 66.11 HuoJu is parallel to GongSun SP 4 but very close to the metatarsal bone. In fact, it has much more satisfying effects if the needle is inserted next to the bone (“bone treating bone” method). It is among the most effective points in the treatment of tension headaches and pain in the above-orbital bone and to restore normal coordination between the heart and the kidney.

As can be understood, this style of acupuncture in its simplicity hides all the complexities of classical Chinese medicine. Hence the charm that exerts on the therapist who loves the culture and history of this medicine. Coming from a family lineage, the learning of Tung’s style can not be separated from an apprenticeship connection between student and master: only in this context it is possible to fully grasp its hues and its therapeutic motivations.

Master Tung is sometimes called Master Dong. The reason for this is that Master Tung originally took the Wade-Giles romanization system of his surname “董” before the pinyin system (拼音, PĪNYĪN) became popular. Although pinyin is the most used system now, many people prefer to use Tung as the name was originally translated and as he preferred.